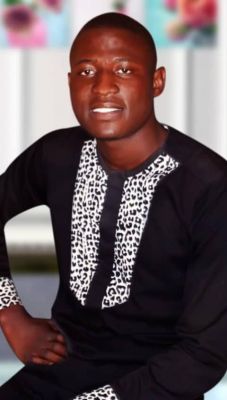 WHEN ALL HOPE IS GONE: A MESSAGE FOR LUNGUDA/WAJA


WHEN ALL HOPE IS GONE
In May, 2021 I was privilege to go to Nyuwar and Heme, the conflict affected areas. We visited some of our friends that were affected in the aftermath of Lunguda Waja crisis….The first day we went to Heme, when I was there, it was 1 month after the Crisis in Nyuwar.
The  city is rubble. The locals easily identify us as new to town, there to greet them. One lady caught  my eyes, she wanted to talk, she told me her story of the destruction, her destroyed home, the dead of her father and that of her mother.… I was moved and touched when I look into her eyes. She bitterly cried, telling me she do not have what to eat, where to lay down and what to wear.
“one of the brothers at Nyuwar told me he lost everything – almost". He wants to rebuild, but there is no money to rebuild. It took him over ten years, planning to raise building that was destroyed overnight. He said he fixed it up and made a thousand improvements by spending much of money, but now it’s all gone. Totally gone. He kept pointing in the direction of where it had stood calling it “my place” and he acted like he wanted me to go see it. But that wasn&#39;t’t possible….
The ECWA Goodnews  Pastor, the person of Jiggil ran for his dear life. Leaving with him underwear as the only clothes. All of his asset, burned to ashes. Having no food to survive on, all hope for survival is gone. Life was like hell on earth. There are many with related issues.One of the people in Nyuwar community said these organised groups were notorious for killing and terrorizing people, and stealing their money and property. "The situation was hell, more than that, more than you can imagine," he said. "For me, I saw everything with my own eyes. This is only a small part of the suffering that I and many people have faced." The charity Together Now operates a scheme that helps refugees in Cham reunite with family members they had to leave behind whilst fleeing persecution. He said that many refugees are forced to leave their family members behind whilst fleeing persecution. Refugees often have to flee their homes and use whatever financial resources they have to reach safety. Individuals in this situation may not have the means to fund travel and food for their family or other costs associated with reuniting with them.
But the amazing thing was the woman who has been coming to the Yamel East DCC Secretariat, this woman who had just lost EVERYTHING. This woman had a gleam in her eye. She had a hope of victory. She had a hope of reunion. And she wanted – she NEEDED – to tell the DCC Executives. In the aftermath of the Crisis, that she had not seen her husband and the children.  Day one: they searched the names of those who reported and his name and children&#39;s names were not  among. Day two: no sign of her husband and  children. For many  days straight, she wandered the vicinity of her former home calling for his husband and children.
She said she determined it, even if it  would take her forever to look for her children and husband. She would never be tired of searching. She was thrilling to be reunited with her family, she dream to be something real, she believe they must be alive somewhere. I was really touched when I heard about the woman&#39;s struggle and strong will. I can&#39;t predict how this story will end. But, hopefully I joined my faith with her and as we wait for the return of her family dead or alive.
One of the refugees exclaimed that:
The last thing I remember of Nyuwar, before we left, was when my mother was taking me from our place to a place of safety. The roads were full of flames rising up from the town. I saw dead body with no head or no hands or legs. I was so shocked I couldn&#39;t stop crying. To calm me down, my mother told me they were mean people, but I still prayed for them, because even if some considered them mean, they were still dead human beings. Back at home, I left a friend in Nyuwar. I miss her a lot and I miss going to school with her. I used to play and read with her with my books but I couldn&#39;t bring it with me. We also used to have pigeons, one of them had eggs, I would feed them and care for them. I’m worried about them, I really pray someone is still caring for them. But here I don&#39;t even have a small chicken to care for.  I miss my home a lot. I hope one day we’ll be back and things will be just like before. A young boy added that "it is very hard for me to understand the bloodshed, since I have never hurt anyone. I have seen some of my family members killed and others injured. I identify that I am a young boy who have witnessed conflict. I always think about my father, my mother and the rest of my family. I think about my former neighbours. I don&#39;t know if they are alive or not.
When the world says give up, faith says Dare to Hope. When your heart says it will never get better, faith says Dare to Hope. When depression, frustration, disappointment consume you, faith says Dare to Hope. "For weeping may endure for a night, but Joy cometh in the morning". Hope is all about knowing that no matter what happens, our father will take care of us.

Writer at Hopeful Me

"For my past can't go with me, as I step into my destiny" 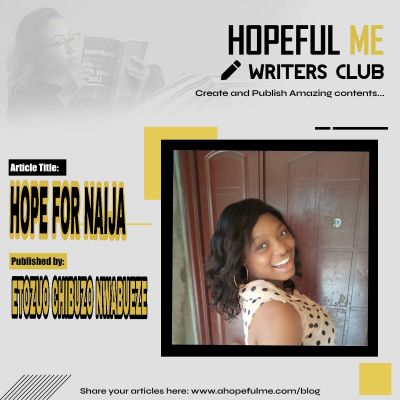 Hope For Naija
By Etozuo Chibuzo Nwabueze | 106 views
Publish an Article
WHEN ALL HOPE IS GONE: A MESSAGE FOR LUNGUDA/WAJA
Hopeful Me