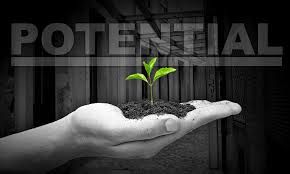 Potential and God’s Purpose Until a man can see beyond his own loins, the future is in danger. God created everything for a purpose and equipped each created thing with the corresponding potential or ability to fulfill that pur- pose. All of nature testifies to this great truth, as is evidenced by the fact that seeds always carry within themselves the germ of the trees they were destined to produce. In every bird there is a flock, in every cow a herd, in every fish a school, and in every wolf a pack. Everything is pregnant with the potential to become all it was created to be. The release and maximization of that potential is dependent, how- ever, on an environment that is conducive to its development and release. For instance, despite the potential of a seed to produce a tree after its kind, and to bring forth fruit in abundance, this great potential can be minimized, restrained, or immobilized by an improper environmental condition. If the seed is placed on a baked clay tile or a stone, or in a polluted substance or toxic elements, its great potential will be restricted and never fully maximized. This limitation of potential not only robs the seed of the right to fulfill its true potential but it also robs birds of food and of branch- es for their nests, and deprives people of wood for building houses, of fruit for food, and of fuel for heat and cooking. In essence, this loss of potential due to an improper environment interferes with the entire ecological system. The seed fails to produce a tree, which is prevented from producing oxygen to give life to men, who are then incapable of fulfilling God’s will and purpose in the earth. Therefore, any attempt to restrict, abuse, misuse, oppress, or repress the potential of any living thing has a direct effect on the purpose and will of God. A WORD TO THE THIRD WORLD The magnitude and depth of human potential on earth has yet to be tapped. Millions are born, live, and die, never discovering or exposing the awesome potential that resides within them. This trag- ic state of affairs, which is a global phenomenon, is the result of man’s succumbing to life governed by his own devices. The major source of this tragedy is ignorance. The most powerful enemy of mankind is not sin or satan, but this death-dealing, life-stealing force called ignorance. The Old Testament prophet Hosea recognized ignorance as the primary source of personal, social, and national destruction. When relaying God’s explanation for moral and social decay among the nations, he wrote, “My people are destroyed from lack of knowledge” (Hosea 4:6a). The implication is that destruction in any area of our lives, whether personally or nationally, is related to a lack of knowledge. The most powerful enemy of mankind is not sin or satan, but ignorance. This reality is profoundly true as it relates to the maximization of our potential. The ignorance of mankind concerning the value, worth, and magnitude of human potential causes massive oppres- sion of our wonderful treasure. Our planet is now home to over 5.8 billion people, all of whom are “created in the image of God” and possess the potential to fulfill the purpose for which they have been born. Over 4 billion of these people live in countries and conditions described as Third World. The term Third World is not ethnic or racial in orientation, but is more philosophical and conditional in meaning. Technically, it is used to describe any people who have not been allowed to partici- pate in or directly benefit from the industrial revolution, and who therefore have not directly profited from the social, economic, and technological advancement that accompanied this revolution. In practical terms, the term Third World categorizes all people who, for whatever reason, have been robbed of the opportunity to discover, develop, refine, release, and maximize their God-given potential. This m

Author at Hopeful Me